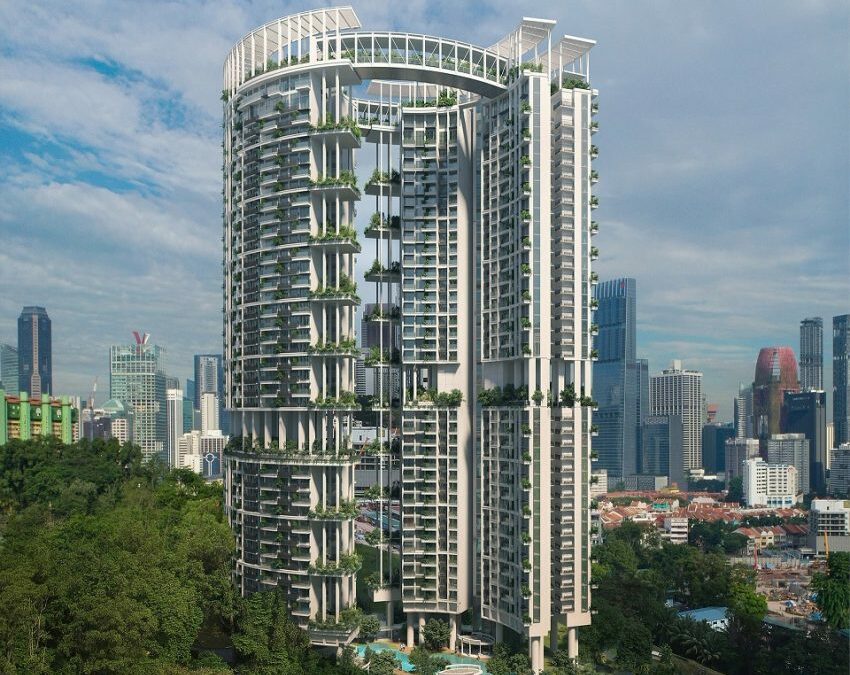 If you are a resident or frequent tourist in Singapore, then you probably would have heard of the tallest residential building in the Outram-Chinatown district in Central Singapore. One Pearl Bank, after its launching, would be one of Singapore’s biggest project of all time.

The soon to be launched One Pearl Bank started making waves right from its sales gallery with more than 4000 visitors recorded. It is the rebirth of the iconic Pearl Bank Apartment in Chinatown Precinct.

What more, its location gives the resident a 360 endless view of the opulent greenery of Pearl’s Hills City Park. With the architectural design as well as the location of the luxurious residence, you should expect nothing but the best of residential project.

Origin of the One Pearl Bank Condominium

The history of this fantastic edifice started in 1976 when the former Pearl Bank Apartment was launched. Then in 2018, the building makes waves as one of the most-talked-about en bloc sales. The building was first placed on auction on 4th August 2007 but didn’t yield positive result due to lack of bidders.

Later in August 2008, the building recorded its second tender but also failed with collective sale agreement not fulfilled.

The horseshoe shape-like condominium witnesses a change in the story in 2018 leading to the surprise of many due to its long conservation.  During the auction process, CapitaLand was declared as the winning bidder on 13th of February,2018 with a staggering $728 million for the amazing piece.

What more, the building during its sales gallery session recorded a massive 4000+ visitors. Thus, the expectation of people on this development is exceedingly high and the developer sure won’t disappoint. According to the developer, the completion date of this great project is set to be 2023.

With the waves attached to this building, it’s not strange that the project will be handled by one of Singapore’s best real estate developer. CapitaLand has an excellent track record both locally and globally when it comes to constructing an incredible real estate project.

Furthermore, the company is regarded as one of the largest real estate developers in Asia and has a portfolio of asset worth $123 billion as of June 2019. Although the company’s primary focus is within China and Singapore’s market, yet their reputation when it comes to developing top-notch projects in countries like India, Vietnam, Australia, the United States and Europe at large is unrivalled.

Some of CapitaLand past projects include but not limited to D’Leedon, Sky Habitat, The Interlace and a host of others. Also, it should be noted that CapitaLand doesn’t only invest in real estate project but also extend their tentacles to other business investment.

According to One Pearl Bank Condo developer, this design of this project is inspired by the vivacity of the Central District as well as the dynamism of the business district. Amidst the bustling city is the 774 residential units’ condominium.

The 99-years leasehold development construction will take place on a massive 86,000 square feet landmass with several residential concepts such as 1-bedroom, 2-bedroom, 3-bedroom, 4-bedroom and a penthouse with a landmass ranging from 430 square feet. It comes with two gently curving 39-storeys towers which link to the roof by dramatic sky bridges.

This tower will avail residents’ access to the panoramic view of extending from the Central Business District to Sentosa.

Consequently, the project will feature World-First sky allotment gardens a series arrayed vertically which offers an exceptional view of Chinatown. Talk about integrating nature with quality and comfortable living experience.

Each tower comprises of 18 gardens, making it the first skyscraper building to have such a feature. This is good news to farmers who’d love to plant in these gardens. These and much more are what you’ll enjoy from this fantastic edifice from CapitaLand.

Capitaland introduce a first Reno Zero Provision package for all buyers of One Pearl Bank which means all units will be partially renovated with lighting, hidden dining table, high end bathrom accessories like Hansgrohe, etc. This attractive package allows you to rent out your unit immediately after getting your keys and your tenant can just bring his luggage and move in immediately.

One Pearl Bank Condominium’s location is the famous Outram-Chinatown city. It is one of the busiest and most prominent cities in the whole of Singapore. With this development located in a town such as this, there will be an expectation that it will be surrounded by loads of amazing amenities that will make the living experience better, livelier and more comfortable.

The iconic project will share proximity with shopping malls, train stations, schools (primary, secondary and tertiary), restaurants, healthcare center and a host of other great amenities.

This is one of the Unique Selling Propositions of this development. It shares close connectivity with major train stations such as Outram Train Station that connects with the North-East Line, East-West Line as well as the upcoming Thomson East-Coast Line. Outram park where one pearl bank is located is the rare only 3 stations in Singapore that is connected by up to 3 MRT lines. The other two stations are Dhoby Ghaut and Marina Bay.

Also, this development features proximity to various bus stations with a short driving distance to the famous Marina Bay Financial Center (MBFC) and the Central Business District (CBD). For lovers of funs and gatherings, you’ll have direct access to Sentosa and East Coast Park for your fun-filled family gatherings.

Well, this is probably what some people are eager to know. What are the amenities you’ll enjoy as a resident of this development? And are these amenities enough to make a living more comfortable without the need to look for it elsewhere?

Fortunately, the answers to all your questions are in the affirmative because the location of this condominium avails it the opportunity to be surrounded with lots of amazing amenities for your day to day activities.

Some of these amenities include;

We have no doubt the iconic one pearl bank will never fall short in demand from tenants. With tenants expected from central business district to largest medical campus in south east asia just within walking distance, lets reference another iconic development Soleil @ Sinaran which is located within Novena medical hub and also within walking distance to Novena Mrt and see what type of yields it is getting.

Nothing surprising as expected, soleil and dorsett high rental volumne proof the demand for large developments in well located areas with rental for 2 bedrooms commanding as much as $4000-$6300.

Future developments going to be launch in the near coming months includes the freehold Chinatown plaza and the leasehold former landmark tower.

With the Chinatown plaza estimated breakeven cost of $2590/psf , it is expected to be selling at near $3000/psf on average for a 15% profit margin. Landmark tower has a lower breakeven price at $1993/psf. We can expect landmark tower to be pricing more strategically and maybe try to price lower than one pearl bank at an average of $2300/psf.

One pearl bank as of written now are launching a special Covid promotion till end of Phase 1. Developers are giving a total of 8% discount for all bedroom types including the 3 bedrooms for the very first time. From as low as $21xx/psf, which is even lower than the breakeven price. It is also the first time i have witness capitaland adopting a loss leader strategy to attract buyers and move sales.

it is fantastic for buyers now who previously miss out during the launch day and now able to get at even lower price than launch day. Do get in touch with us for more information on the discounted units availability if you want a good deal.

One pearl bank would certainly impresses any buyers or bystanders who walks pass with its alluring majestic structure. Expect to pay good money for a premium product that is perfect in almost every ways. Location, luxury finishes, central location, high in demand, etc. We foresee it will not be difficult for investors to exit when the actual product is ready and buyers will be flocking to it emotionally. Only 35% sold, it is certainly a good time for buyers or investors who has been eyeing to capitalize on the Covid discounts right now.

GET IN TOUCH WITH US FOR MORE INFO ON THE DISCOUNT