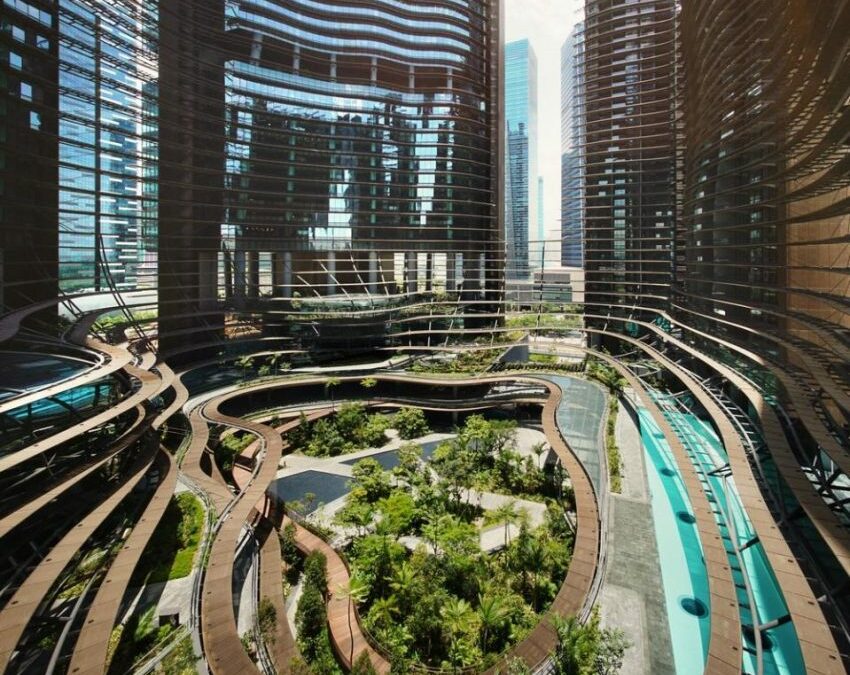 If you are searching for a luxurious residence in a highly fashionable area, then Marina One residence should catch your fancy. Sited in the heart of an iconic and most-sought-after area (Marina Bay), this high-end luxury and the award-winning building is one of the most talked-about developments in the whole of Singapore.

From brilliant conceptualization to fantastic facilities, well-thought-out plan, architectural design, location and more, it’s undoubtedly a beauty to behold. What more, Marina One Residence is designed in a bid to create a multifaceted urban space for booming Singapore’s Central Business District.

With this project, residents will not just enjoy the dynamic metropolitan culture but also the prestige, comfortability and the luxuriance that comes with it.

Origin of Marina One Residence

The journey of this beautiful edifice started in late 2012 when it was launched in the real estate market for potential bidders. The 33-storey blocks became more popular following the unveiling of its architectural design in February 2012.

Consequently, after its completion in early 2018, it became the talk of the town and was given a series of awards for an excellent job. The project is in line with the Urban Redevelopment Authority’s (URA) mission in making Marina South a financial hub with an established global business.

Following the phenomenal response garnered after the successful completion, it’s probably expected that the developers would be a top gun in the real estate industry. Well, you are right. M+S Pte Ltd developed the Marina One Residence under a 60:40 joint venture between Temasek Holdings Pte Ltd of Singapore and Khazanah Nasional Berhad of Malaysia.

These two real estate developers have a proven track record when it comes to the development of the high-end luxury project that leaves people wowed beyond their imagination.

Temasek Holdings is an investment company in Singapore. They invest in a wide range of industries such as telecommunications, real estate, finance, industrials, life sciences, transportation, technology and so on.

It was established on the 25th of June, 1974 as a Commercial Investment Company owned by the government of Singapore. Temasek Holdings has worked on several real estate projects both in Singapore and other countries.

Its standard norm is to award the project to their subsidiary companies such as M+S Pte. Ltd, Capital Land Ltd, A.S Watson Holdings, Olam International Limited and a host of others.

This is also a government-owned company. It is a sovereign wealth fund of the government of Malaysia saddled with the responsibility of creating long-term wealth for the country via foolproof commercial and strategic objectives.

It was declared as a public limited company on the 3rd of September, 1993 under the 1965 Company’s Act in Malaysia. They have an excellent track record when it comes to developing award-winning project in Malaysia, Singapore and so on.

To be clear, the Marina One Residence project was handled by M+S Pte Ltd under the joint venture of Khazanah Nasional Berhad and Temasek Holdings Pte Ltd. This will be the second project of this company with their first project being the popular “Duo Residence.”

According to the design, the Marina One residence features two 30-storey blocks with 1,042 residential units. Unlike other building projects in Singapore, the Marina One Residence has 26,244.20 square meters landmass.

Each unit offers excellent cityscape with greenery surrounding and sparkling waters to make it more mesmerizing. Also, the project is designed in a way that there is unlimited access to natural lighting, proper ventilation and space.

It is located at the centre of the always vibrant and bustling Marina Bay. The Marina one residence stands tall with two residential towers at 21, and 23 Marina way at the center of the New financial District. It features luscious greenery surroundings envelop with an endless view of the Prime Waterfront living.

In addition, it shares a great connectivity with significant Stations in the city which avails its residents the direct access to most city locales. With where this edifice is located, residents wouldn’t have a problem seamlessly commuting the city.

However, the Thomson Line isn’t in operation right now, but it’s expected to be fully operational in 2021. What more, this project shares proximity with shopping malls, supermarkets, schools, lifestyle, schools, restaurants and other amenities that would make your stay worthwhile.

One unique facility peculiar to Marina One Residence is the Biodiversity Garden. The green heart facilities that give more tranquility, calm, and great feeling despite being in a populous and busy area.

What this project lacks in terms of landmass, it meets up when it comes to having proximity with amazing amenities that would make living better, easier and more comfortable. Thanks to its always full of ever-bustling location-Marina Bay.

The following are some of the amenities you’ll enjoy if you are a resident of the Marina One Residence;

There is no doubt why Marina one residences is one of the most hype up and undervalue development that one can buy right now with the discount right now. At $2200/psf , many buyers will find it unbelievable that it is on par with mass market condo prices outside the core central region.

From the chart above you can see rest of central core (RCR) in the district 15 areas transecting around $2500/psf. Nearby in district 3, you also have one pearl bank, Sky everton already transecting at $2600-$2800/psf on average as well. Inside CCR where luxury development South beach residence and Wallich residence which are on par with Marina one are transecting around $3000/psf, there is certainly a lot of room for appreciation if you can buy marina one at $2200/psf . How valuable are prime development in CBD you may wonder, the Sail @ Marina bay is still transecting around $2000/psf despite coming to 20 years old. With the limited supply in the CBD and coupled with the potential greater southern waterfront , there seems to be limitless potential for Marina one buyers going ahead.

The greater southern waterfront transformation was mentioned by prime minister Lee of singapore in 2019 national rally to be the forefront of next singapore major transformation. Close to 9000 homes will be built along the it with mix residential and prime office spaces replacing the current keppel port.

If you are a investors looking for good rental yield and worry about long turnover rate before you will find your next tenant, you will be glad to know that smaller units in the central business district are the most in demand properties for lease in singapore. A data release by URA shows consistency that prime central district has had the most amount of lease transections ratio due to the lack of supply.

Now lets look at the rental potential around marina bay. Marina one residences has been able to command an average $5.2-$7.5/psf based on the recent transected data from URA which means a 1 bedroom (700sqft) is getting $3500-$4900 depending on factors like Floor level, furnishing, etc. We are not surprise by the high rental yield given the locality and quality tenants are willing to pay.

With the lack of supply, government backed developer, greatly undervalue and fronting greater southern waterfront transformation, there can’t be a better investment home than this. With 1 bedroom prices starting from $1.6m, i would recommend an exit strategy of at least 8 years, being able to collect rent immediately is a bonus and im confident any investors can exit with capital gain and rental income in the near future.