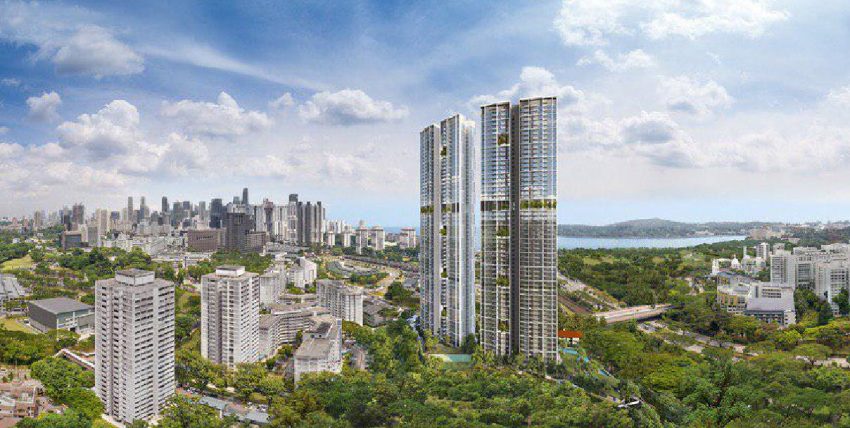 Avenue South Residence is a recent, and luxurious condominium Silat Road close to Singapore General Hospital. It will go down in history as one of the most significant projects in Singapore with a staggering 245,972 square feet landmass.

Also, it is the 1st Residential project in the New Central District in Singapore and offers its residents an endless panoramic view of the Greater Southern Waterfront District City (the biggest government’s development plan so far.)

What more, the developer of this project is known for building loads of masterpiece that exceeds market expectation. With the proven track records, ingenious plan and excellent facilities, this project will be one of the most talked-about Condominiums in Singapore.

Origin of The Condo

Avenue South Residence was part of the Government Land Sales program in 2018. Located in a highly competitive area filled with buzzes of activities, it’s strange that this amazing piece would have just a bidder.

Measuring up to 245,972 square feet, the project was acquired through the Joint venture of three known real estate industries in 2018 at the rate of SGD 1.035 billion. These industries (UOL Venture Investments, UIC Homes, Kheng Leong Company) have an unmatched reputation when it comes to building a masterpiece that would make waves globally.

With their well-thought-out plan and years of experience in this field, you are sure not to be disappointed after its completion in 2023.

The Avenue South Residence will be jointly developed by three real estate companies with solid years of experience and great reputation for producing excellent work. Let’s run through each of these companies to have a better understanding of what to expect.

If you’re a keen follower of the real estate industry in Singapore, this shouldn’t be your first time of coming across this name. UOL is one of the biggest and top property developers in Singapore, with its major shareholder being the reputable United Overseas Bank.

UOL has an excellent track record with their tentacles spread across cities like Malaysia, United Kingdom, China and Singapore. According to statistics, the group’s net worth is $20billion and some of its development are Amber 45, the Tre Ver at Potong Pasir to mention a few.

UIC Homes is a Singapore-based real estate company and has been in existence as far back as 1963. It started as a private company but later went public back in 1969. UIC is a world-class real estate developer with Singapore Land Limited being one of their significant shareholders since 1990.

They have developed many projects either as a sole developer or collaboration with other companies. Its work has extended to cities like Hong Kong, Los Angeles, London, Shanghai and so on.

This project is projected on a 245,972 square feet landmass with an estimated 1,074 residential units that offer 1 to a 4-bedroom apartment. This condo consists of 7 blocks of 56-storey as well as two tower buildings for cross ventilation.

Furthermore, it is required to conserve five low-rise residential blocks of 4-storey each (in tandem with the directives of the government), four private function rooms, a childcare center, eighteen sky courts and sky garden, and eight commercial units.

If you want to have a broader and better knowledge of the design and layout of this fantastic building, the layout of this project is available for review on the internet.

Avenue South Residence is located at Silat avenue in Queenstown Estate at District 03, Singapore. It is very close to the Central Business District and Keppel Transformation in Singapore.

This development shares a close border with some major expressways such as Ayer Rajah Expressway (AYE), Tuas Second Link (this road serves as a linkage to Malaysia). It also shares connectivity with other Expressways like Marina Coastal Expressway (MCE), and Central Expressway (CTE).

These Expressways give you access to major cities in Singapore, especially cities in the eastern and western part of Singapore. Apart from this, Avenue South Residence is an ideal place to live without zero transportation issue.

It is only 800m or a 10 mins walk along the rail corridor to the nearest mrt at Cantonment MRT station which will also be ready by 2023. Thanks to its connectivity with MRT lines and buses that allows residents to commute without hassles to their respective schools or work. Some of the station that shares proximity with Avenue South Residence are Outram Park Interchange Station, Cantonment MRT station, Keppel MRT station and so on.

One of the things that pique the interest of people in this project is the fact that it’ll share proximity with the Greater Southern Waterfront City. This project is currently the Government’s biggest development plan following the Marina Bay project in 2006. Investors can take advantage of this 1st mover advantage with Avenue south residence as transformation always helps with capital appreciation.

Other amenities you’ll enjoy as a resident of this astounding project includes seamless access to shopping malls, supermarkets, healthcare center, restaurants and other amenities that make life better and more comfortable to live.

The main concern for this project for investors or homebuyers would certainly be the distance to the nearest mrt. Even though free shuttle service is available to nearby Outram mrt interchange, investors would sure have concerns regarding the rental. I would like to reference another project that recently TOP that is almost similar in scale by the same developer UOL, Principal Garden. Principal Garden is also about 1km away from the nearest MRT, Redhill Mrt.

Principal Garden shares a lot of similarities with Avenue south residence in terms of land size, quality, facilities, unblock view and serene environment. I am personally very impress with principal garden project as a whole. We can see that consumers are willing to pay for all this above attributes despite distance from the MRT. We can certainly see a lot of potential tenants from nearby Outram medical hub, CBD and also not forgetting Dyson’s new global headquaters will be moving to St james power station which is just around corner. We certainly see a high potential demand in this low supply area where there’s not many private housing supply around.

lets look at the average transected price around the area

We can see that Sky everton a freehold project is averaging around $2800/psf. One Pearl Bank would be a better comparison being a 99 year lease project as well and we can see the average buyers already paying $2500/psf, Avenue south seems very much undervalue considering the ongoing transected price. Next, let us dive into the actual price different of what it means in terms of quantum for a 3 bedroom between the two.

A comparison between two transected 25th floor 3bedroom unit shows a price different of almost $849k. Is proximity to a mrt worth this amount of money? This is very subjective but i guess any investors wouldn’t mind this amount of safety net if they would be invest into Avenue south.

Even for a smaller 2 bedroom, the price difference between the 2 projects is a vast difference of $507k.

I have always been a fan of UOL projects. They know how to price their products competitively and understands what buyers/investors wants. There are also another estimated 3800 HDB BTOs in prime HDB estates like Bukit Merah and Queenstown that has just obtain their MOP and another 5000 BTOs in 2021, we certainly believe there will be demands from these upgraders in the near future. Coupled with the first mover advantage into Greater southern waterfront transformation, i certainly can see no wrong with the potential and capital upside of this project. It is the most undervalue buy of the year among all the projects i have seen so far.

GET IN TOUCH WITH US TO KNOW MORE